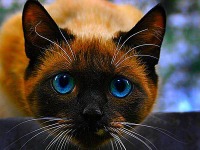 A long time ago, I had cats. I had lots of cats. I had 4 who lived in the house and, depending on what day it was, anywhere from 4 to 10 who hung around outside or in the garage. There were cats in the driveway, or cats on the front porch, or cats in the back yard; wherever you looked, you were going to see cats. Some of them were strays, some were “neighborhood cats” who would make the rounds of the neighborhood and only came to my house every week or two, and some actually lived with neighbors but hung out at my house. I liked cats. I was the cat guy in the neighborhood, kind of like a crazy cat lady except I was a crazy cat guy.

Hard as it may be to believe, they got along very well, all these different kinds of cats from who-knows-how-many different places. It was kind of like a little cat UN. Every now and then some cat would show up and try to take over, challenging every cat in sight to either fight or leave. I would deal with these trouble-makers as the situation dictated. One of them was Caesar.

Caesar was not a particularly friendly cat. He actually lived 2 doors down and I don’t know why he felt the need to come down to my house and make trouble, but he did. And of course he totally ignored me when I told him, “Be nice!” Of course, I don’t actually know why I even said that, because at that time I had no idea that he could even understand. But I did say it, just like I talked to all the cats; it was just something I did. Anyway, when he came down he would try to pick a fight with the first cat he saw, doing that characteristic screaming, spitting, hair-standing-on-end nonsense until I came out and ran him off. I gave up on the “be nice” business pretty quick and usually I would get the garden hose and spray him and he’d take off for home. It didn’t take much, just one little shot, because Caesar did not like the water. Then a day or two later he’d be back and we’d do it again.

This went on for a long time until one day Caesar decided he did not want to leave. I sprayed him with the hose and, instead of running for home, he just ran away a little bit but stayed in the yard. I sprayed him again and he moved again. I sprayed him again and he began running around the yard, and I continued to spray him as he ran around and around in the yard, and we did that for several long minutes. That must have been a sight to see, this cat running around in a yard he could easily leave any time he wanted to, and this crazy guy spraying him with a hose as he ran! Anyway, I guess he finally decided enough was enough because he finally took off for home.

And it really must have been enough because he stopped coming down. I didn’t see Caesar again for about 6 months. Then one day I looked up from my yardwork and there he was, across the street, perched up on the neighbor’s big brick mail box, just sitting there looking at me. I don’t know how long he had been there, but it was like he knew he was safe over there, across the street… not in my yard. I stopped what I was doing and looked at him, and he just sat there looking at me. It was quite profound, actually, to see this creature that had always acted like he didn’t have a brain in his head, this cat that had always ignored me when I told him to behave, this big old pain in the butt, sitting there now and staring at me like he had come for a reason. Like he had something to say. As I said, at that time I had no reason to think that cats could even do that, but I just felt like he had something he wanted to say to me. But he wasn’t talking and, as far as I knew, he couldn’t, so I did: I told him he was welcome to come over if he could behave, but if he started up again trying to fight with the other cats then I’d get the water hose out again. I don’t remember if he walked off or if I did, but one of us did and we left it at that.

The next day I was surprised to find Caesar in my yard, along with some of the other cats, behaving himself and acting all civilized, just like everybody else. I don’t know if he was happy about it, but he was doing it, and from that day on he was just one of the gang, hanging out with all the other cats at the crazy cat guy’s house, and I never had to run him off again.