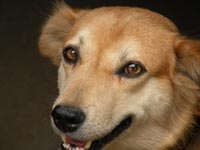 One time I attended a workshop on animal communication, held in the home of one of the participants. In addition to all the people sitting around the living room, there were quite a few dogs and cats who had been brought to be “guinea pigs” for the workshop. We spent the whole morning doing “psychic exercises” among ourselves, sort of getting the humans tuned up before working with the animals.

It was an informal atmosphere, with lots of food and drink around, and for most of the morning, I had been sharing my crackers with a little dog (we’ll call him Wilbur) that belonged to one of the other participants. After lunch, we started doing simple exercises with the animals. Each person would pick an animal, and practice sending it mental messages or asking it questions mentally, while watching and listening for any signs of response (visual or mental). After each exercise, those who wanted to would share their experience with the group; they would tell us what they did, and what kind of response they got. Then we would all pick a different animal for the next exercise.

Now, if you’ve never done this kind of work, there’s one thing about it that takes some getting used to, and that is that an animal doesn’t look at you while it’s “talking” to you. It can be spilling its guts to you about why it wet on the carpet, and the whole while, it’s looking off into the ozone while drooling on your foot. If it’s your own pet, sometimes they will actually look at you while they’re talking to you, especially if there’s a lot of intensity involved. But mostly they just act like their normal selves. Animals don’t make eye contact when they’re communicating with other animals, and it’s no different with a human!

So in these exercises, we started out just trying to make obvious contact with different animals; maybe call their name mentally and watch for the animal to twitch an ear in your direction, or things like that. When it was time to ask the animals actual questions, the woman who was leading the group instructed us to ask the animals questions about their own lives, so that the animals’ owners could verify the answers.

For this exercise, I just happened to pick Wilbur (the cracker eater) for my subject. I mentally called Wilbur’s name, and saw one ear turn in my direction. So I mentally asked Wilbur if he lived in the house or outside, and I saw an image of him sitting at a sliding glass door, looking out into the back yard. With the image came the impression that he lived inside but liked going out. Through the door, I saw just one scrawny tree in the back yard. The wall was orange, and there were windows on both sides of the door. I thought for sure that I had to be wrong about the orange wall! Then I asked him if he slept with his owners or had his own bed. I saw an image of two beds, one obviously a “people” bed, and the other a round, orange doggie bed next to it. It was obvious that he had his own bed!

When it came time to share, I told the group what I had seen, while Wilbur’s owners listened intently. When I finished, they verified that everything I had seen was correct, with a couple minor errors concerning the doggie bed: it was square with round corners, and it was red-orange! Yes, he loved going outside, the single scrawny tree was a new peach tree, the windows were there on both sides of the sliding glass door, and yes, the wall was orange!

Everyone in the group was absolutely amazed, especially me, and I thanked Wilbur profusely for being so helpful! When I mentioned to the group that I had been feeding him crackers all morning, they all cried “Aha!” in unison. The secret to success with animal communication was obviously a box of Ritz crackers!