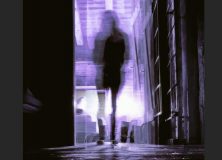 If you have spirits or unwanted energies in your home or workplace they can cause serious problems. Getting them out is called clearing, and that’s what I do. The older the building, the more likely it will have left-over spirits or energy from previous occupants or visitors. So old houses, especially those that have been converted into businesses or apartments, are very likely to need clearing.

Spirits hanging around in a home or business sometimes cause problems just because they want to be left alone. That’s what happened with this client:

A man who was running his business out of a very old house called me because “something weird” was going on. One employee, who worked near the back door, felt that she was being harassed at her desk. She said that something was going so far as to touch her! Another employee developed such a bad attitude that he was in danger of being fired.

Upon checking, I found a spirit who felt like the area around the back door was “his.” He resented that employee being there all the time so he was trying to run her off. I also found a spirit “living” in the office of the other employee. This spirit likewise resented the employee being there. It was directing so much anger at the employee that it actually affected the man’s behavior. I removed both of these spirits and the problems immediately ceased. The first employee felt like the harassment stopped, and the second employee’s bad attitude just disappeared.

And energy left behind by previous occupants or visitors can affect the moods and even behaviors of current occupants. It’s literally like “cooties” and the effects can be bizarre, as this landlord found out.

I was called to clear a very old boardinghouse that was being renovated. There was one room that I could barely stand to be in. This room possibly felt worse than anything I’ve ever felt in my life! But there was no spirit there, just horrible energy from someone who had lived there before. After I got the room all cleared out I told the owner what I had found. He said that explained why he could never keep tenants in that room; they always moved out as soon as they could.

If you feel like you have spirits or energy causing problems in your home or business, call me and let’s discuss your situation.